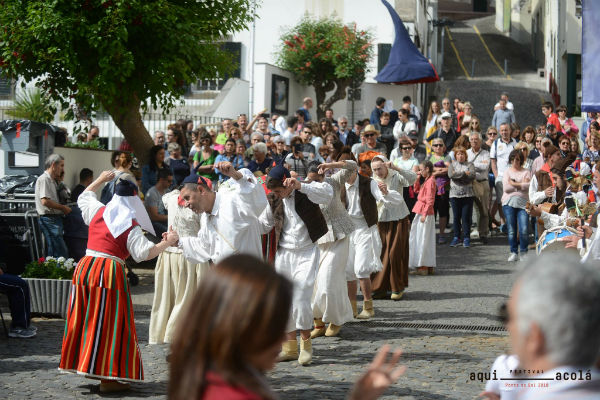 The Grupo de Folclore da Ponta do Sol was born in 1981 and has a remarkable work collecting, preserving and divulgating the customs and traditional clothing of Madeira, Ponta do Sol´s Municipality in particular.

In addition to being a member of the Portuguese Folklore Federation since 1990, has been honored with a Cultural Award by the Regional Government of Madeira. Has participated in several national and international folklore festivals, and has been responsible for spreading the traditions of Ponta do Sol in all editions of the Festival Aqui_Acolá.

This year is no exception and the Group presents several live pictures, representative of the History of Ponta do Sol at the end of the 19th and 20th centuries.

During the festival you can find several moving figures to represent period experiences and daily activities or tocatas that will animate you with songs and dances..

When tradition meets the theater an unforgettable street show is born.

The Grupo de Folclore da Ponta do Sol and Teatro Bolo do Caco have gathered to surprise those who are on Ponta do Sol’s streets, at the Festival Aqui Acolá.

Among Songs and dances it’s possible to tell stories.

The “Festa da Ascensão” commemorates the ascension of Jesus Christ to heaven. It is an ecumenical feast, so it’s celebrated by all Christian churches, such as the Passion of Christ and Pentecost. The Ascension is traditionally celebrated on a Thursday, the 40th of Easter.

This celebration has a great tradition in Ponta do Sol, having already been a local holiday. At the end of the Catholic Mass, rose petals will be thrown from the main altar of the church, keeping an ancient tradition. As the petals are blessed, people take them so that the houses and harvests could be blessed.

At the end of the ceremony in the churchyard, you will be able to watch the demonstration of “songs of the holy spirit”, also very traditional, with “saloias” (little girls that usually sing those traditional songs) coming from the different parishes of Ponta do Sol and dressed according to the most noble tradition.